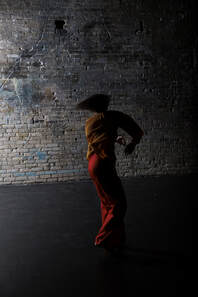 ​Paula Mann’s journey took her from Appalachian roots to Detroit teenage runaway, through Kent State in the 1970's, to NYU and the downtown dance scene of the 1980's. She studied Humphrey/Limon technique with Ruth Currier and members of the Limon company, Hawkins technique with Eric Hawkins and Cunningham with Merce Cunningham. Her first concert of choreography was produced at the Merce Cunningham Studio in 1980 and later that year she co-founded Dudek/Mann + Dancers with partner Tina Dudek. Mann moved to the Twin Cities in 1987, armed with a BA and MFA in Dance from NYU, and following seven years as co-director of Dudek/Mann + Dancers. Since her arrival in the Twin Cities, Mann has created 50 new works and is co-artistic director of TIME TRACK PRODUCTIONS with visual artist Steve Paul.  She has been a driving force in Contemporary Dance and Performance based out of Minneapolis for the past 30 years; challenging, educating and engaging artists, audiences and communities with passion, inventiveness and rigor. She was full time faculty at the University of Minnesota Department of Theater and Dance from 1993-2013 and is a 2019/2020 McKnight Fellow in Choreography.

Steve Paul has been a writer, director, performer, designer and media artist based in the Twin Cities for 35 years.  He was an original member of Red Eye Collaboration from 1984-1989. In 1989 he joined the staff of the Minnesota Dance Alliance, where he designed and built Studio 6A, a performance space for dance in located in Cowles Center for Dance in Minneapolis. From 1989-1997 he designed lighting, sets and sound for the major dance companies and many theater companies in the Twin Cities. He began expanding his design work into media 30 years ago. His work for new media (digital video, animation and motion graphics) has been seen in collaboration with many performance groups throughout the Twin Cities.  He taught animation/new media applications at the University of Minnesota Department of Art and is now Visualization Director for Visualization and XR for AECOM .